skip to main | skip to sidebar

I was contacted by a couple of guys (David and Michael) who had read this blog and were also planing to do the same ride on the 2nd August who wanted to share a little info about the route etc. I offered to meet the guys out on the route then ride into Leeds with them as this would help me gauge timing and also gain some info about how hard this ride will be. I met them between Gargrave and Foulridge at around 4.45pm they both looked pretty tired at this point with another 40 miles to Leeds from here. I noticed both guys had been carrying back packs with extra water bottles for most of the route approx 4.5 kilos each. Now these guys are 16 years old and had trained hard for this but it was clear the weight they had been carrying had taken it's toll as they had set off from Liverpool at 5.00 am. Micheal got a rear tyre puncher shortly after this and I could sense mental fatigue had started to set in. I offered to repair the tyre and swapped the tube as he gained some rest and took on some food and fluid. We cracked on towards Skipton then we started to increase the pace a little until we found a Tesco Express fuel station in Skipton near the canal. We decided to adjust all tyre pressures back to 60 psi as both there bikes had lost pressure adding to the rolling Resistance. I worked hard here to try and boost morale here by focusing there attention on the great quality tow path we would soon be on at Riddlesden and how the ride to Leeds is easy from this point. As we approached Bingley the prospect of seeing some of there friends and family gave them a boost and the pace picked up again. At Bingley we stopped for a quick final stop before the last push into Leeds, I pointed out that it was 19.30 and would be dark at 21.00 so we needed to press on if we were to avoid a swim near Armley as the trees would make it difficult to see at this time. Again the pace picked up as David had off loaded his Back pack at Bingley and I offered to carry Michael's to save his energy. We arrived at Leeds around 21.10 and the guys had done very well considering there age. I had learned a great deal from this the main thing being the need to keep weight to a minimum so plenty to think about in our final weeks of preparation.
Posted by Clarkyphil at 14:59

Time for a drink 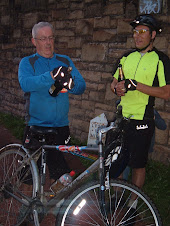 Kim at the finish 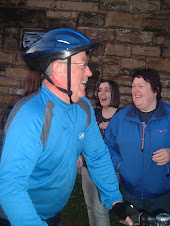 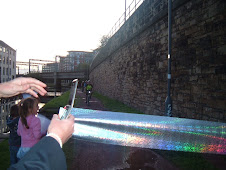 It's a long way back

Getting Phils bike on the car 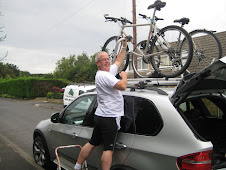 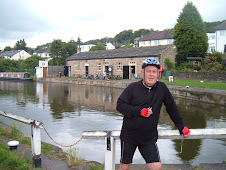 The Cafe at Five Rise Locks is a great gathering point for cyclists and its great to chat to them all about bike stuff and routes etc.

Only down hill from here

Ariving here on our training always gives us a boost as the tow path is good and also no more up hill locks. 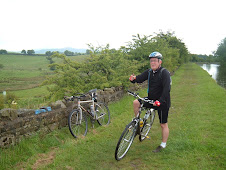 The winding route near Gargrave 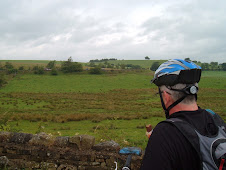 This shot is taken from the tow path looking across towards another stretch of tow path you ride on that apears to double back on its self. You get the impresion here that your not making much progress not what you want after you have pedaled 85 miles already.

Unloading not far from Ganow Tunnel 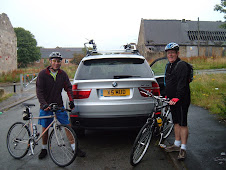 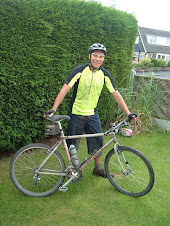 55 Miles of muddy wet trails prepering for the big day - we now know how team Aldi felt on there big day. 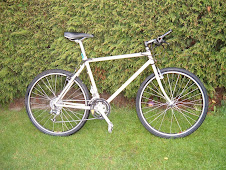